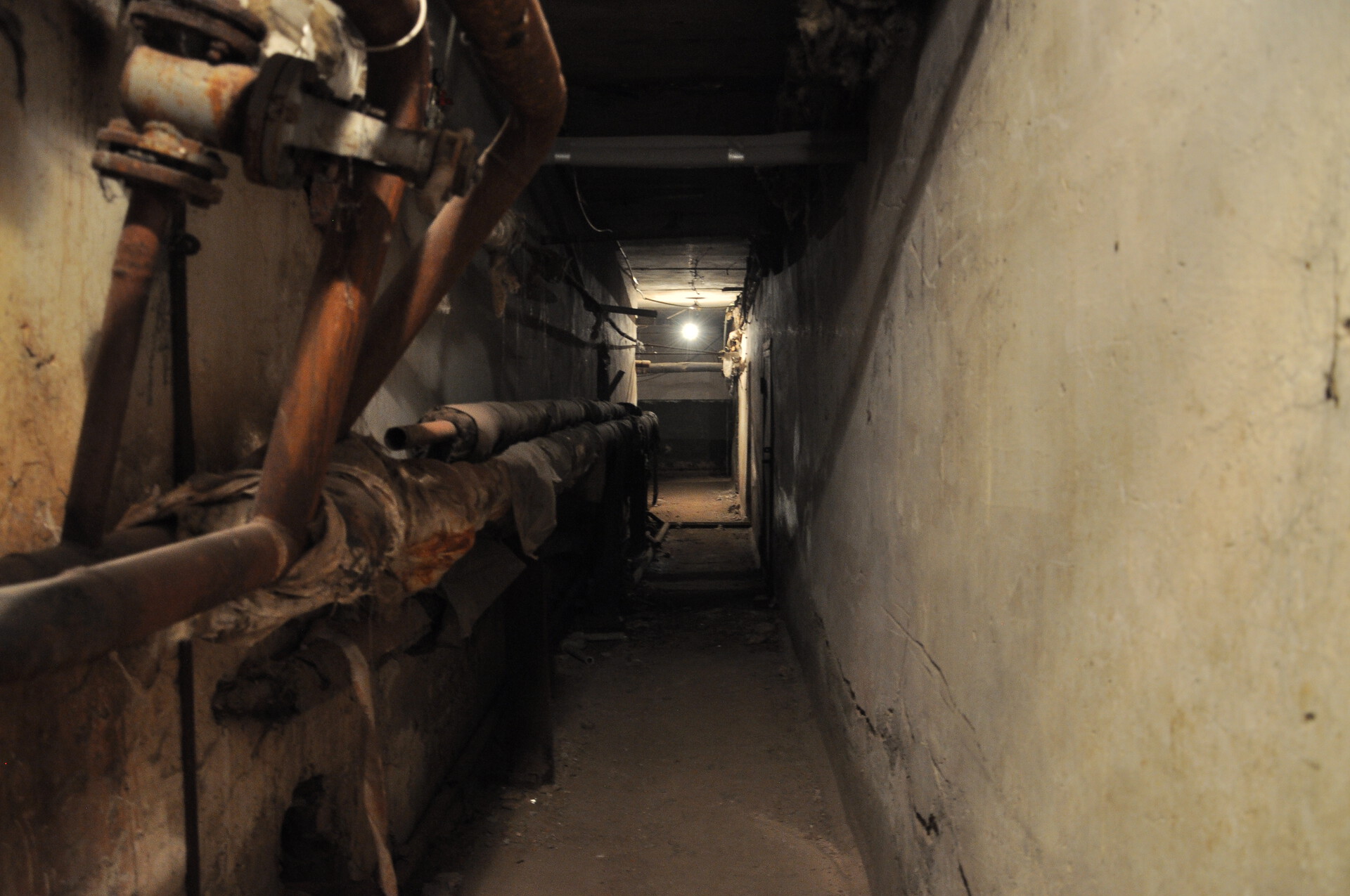 There is a branching network of underground passages, vaults, storerooms and other technical structures under each of the 9 factory buildings.
‘Izolyatsia’ factory basements. Source: 2012, Dima Sergeev.

A plant for producing insulating materials was built in 1955 as a strategic enterprise with an anti-nuclear protection system. Shelters were placed in the basements, which were designed so that workers at the plant could shelter inside them during warfare, bombing and nuclear blasts. In the basements there were supplies and special equipment, which would allow the workers to remain there safely for some time.

After the collapse of the USSR the plant fell into decline. From the 1990s the basements stood empty, until the ‘Izolyatsia’ cultural platform began its work on the plant’s site in 2010. 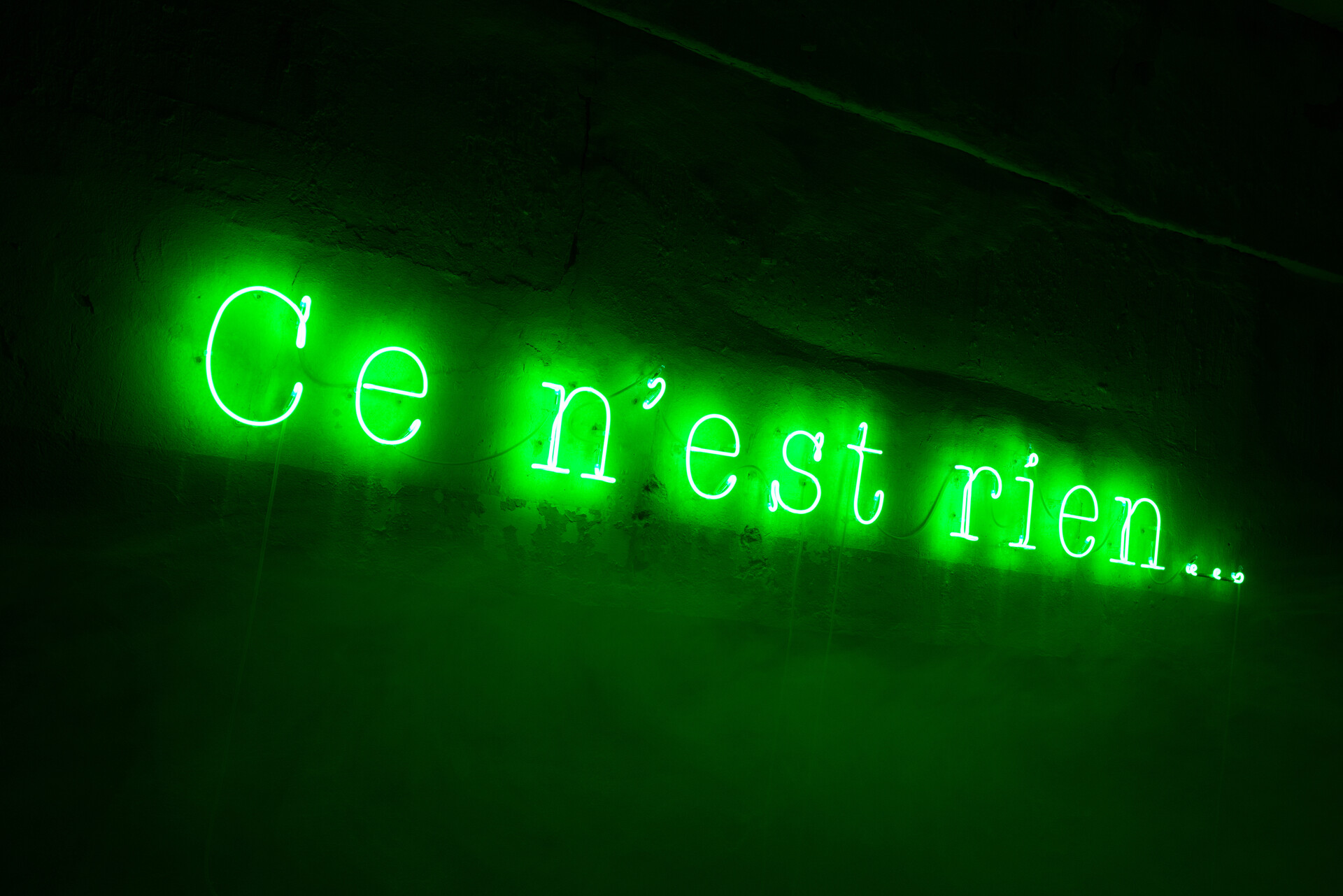 In 2012, as part of the project Where is the Time?, the French artist Kader Attia created the immersive installation ‘Ce n’est rien’. In the basement of the administrative building Attia installed a neon sign saying ‘Ce n’est rien’ (‘It’s nothing’), which shone in the fog of a smoke machine, referring to the last words of the writer Lev Tolstoy. The artist himself characterised the work as a ‘silent testimony, a message to future humanity about the majesty of the end of life’.

“Behind every brick of this artistic institution there lies an unbelievable energy, which is just waiting to break out … […] The world has lost stability, and life is nothing, but it is more valuable than all the gold in the world!”, Kader Attia commented of his work. The path downwards, through a dark narrow corridor with pipes, became a part of the artist’s statement.

The next year (2013) as part of the Turborealism residency, the British artist Paul Chaney made the installation The Acceleration of the Slightest Object in one of the basements. Chaney united human striving toward space travel with theories about the scarcity of resources and overpopulation of the Earth.

For his video installation the artist transformed one of the basements into a fragment of a typical Soviet room from the 1970s, having installed old furniture and a television found in a ‘Khrushchovka’ apartment building and the on the factory premises there. Shots of the mating of the desert locust, which is the ‘proteinic’ hope of humanity for survival, were followed by a visualisation of space vehicles, modelled on the basis of a ‘space playground’ from the 1980s that was found in Donetsk. The artist placed man’s unique capacity for development and self-destruction under question. He also researched the draw towards conquest and excessive consumption as a reaction to trauma from resource dependency.

There is a pessimism and description of future catastrophes inherent to turborealism. But none of the residents could foretell what the ‘Izolyatsia’ Foundation basements would turn into less than a year later. 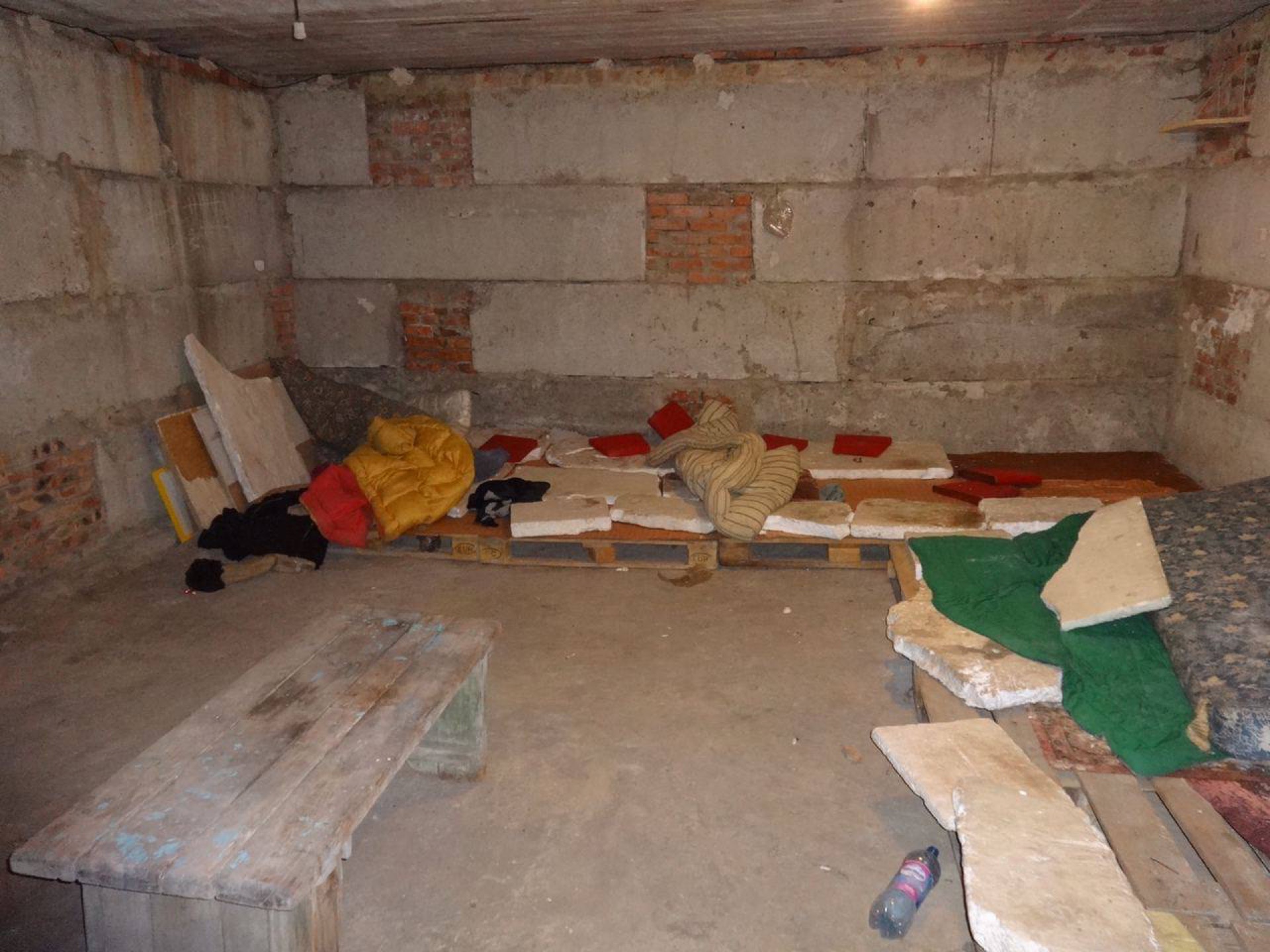 On 9 June 2014, the representatives of the Russian occupation administration in the Donetsk region seized the ‘Izolyatsia’ Foundation site at 3, Svitloho Shlyakhu street. The Russia-backed illegal armed formations quickly evaluated the thickness of the walls and the suitability of the basements. Unfortunately, this was not with the aim of construction.

The basements of two of the former plant’s buildings, where artists of global renown had worked, were turned into cells and torture chambers. At the the ‘Izolyatsia’ Foundation these basements were home to exhibitions and installations. Now a bust of the Soviet leader Lenin and pictures of him meet the new arrivals near the cellar.

They put cells for 20 people in the basement of the two-storey building of the factory management: a general cell, the so-called ‘drinking glass’, which is a punishment cell, and a solitary confinement cell. These are cold, dark, damp rooms, without windows and suitable ventilation, not fit for holding people. Until 2017 there were no toilets in the basement cells, and the prisoners were only allowed to use the toilet once a day for a few minutes.

The following methods of torture and harsh treatment are used on the detainees:

Medical help is not available in the ‘Izolyatsia’ illegal prison. Moreover, according to the testimony of previous detainees, the local doctor was one of the participants in the torture that took place in ‘Izolyatsia’ Foundation basements. He directly participated in tortures, brought prisoners round, and also made sure that the beaten prisoners did not die.

In the early years of the ‘Izolyatsia’ illegal prison’s existence (until approximately autumn 2017) the Russia-backed illegal armed formations tortured the prisoners and broadcasted images on a screen with the audio set to full volume to intimidate the other detainees. Later they began to torture prisoners directly on the floor with the main cells. Furthermore, almost all prisoners undergo torture, even those who have earlier confessed to ‘crimes’ already.

In the 5-storey plant building an empty basement room was equipped for torture with electric shocks. The Russia-backed illegal armed formations installed a so-called ‘tapik’ there: an ‘Army Field Telephone, TAP-1M’. This is how the torture happens: they undress the person and fix their torso and extremities to a metal table. The metal terminals of the telephone are attached to different parts of the body: the extremities, fingers and toes, head, ears, genitals. A generator spins and regulates the electrical voltage. According to the testimony of victims, the length of the electric shocks ranged from several seconds to several minutes. At this point the representatives of the Russian occupation administration ask questions in order to obtain confessions of espionage, extremist activity, etc.

According to the testimony of former prisoners, for some time terrorists farmed champignon mushrooms in one of the buildings’ basements. However, this constructive activity did not carry on for long, and the basements were ultimately turned into torture chambers.

The building situated next to the abandoned hangar is used as a dump. According to the testimony of the prisoners, the representatives of the Russian occupation administration threw the corpses of those who did not survive imprisonment in the ‘Izolyatsia’ illegal prison into the basements underneath the building.