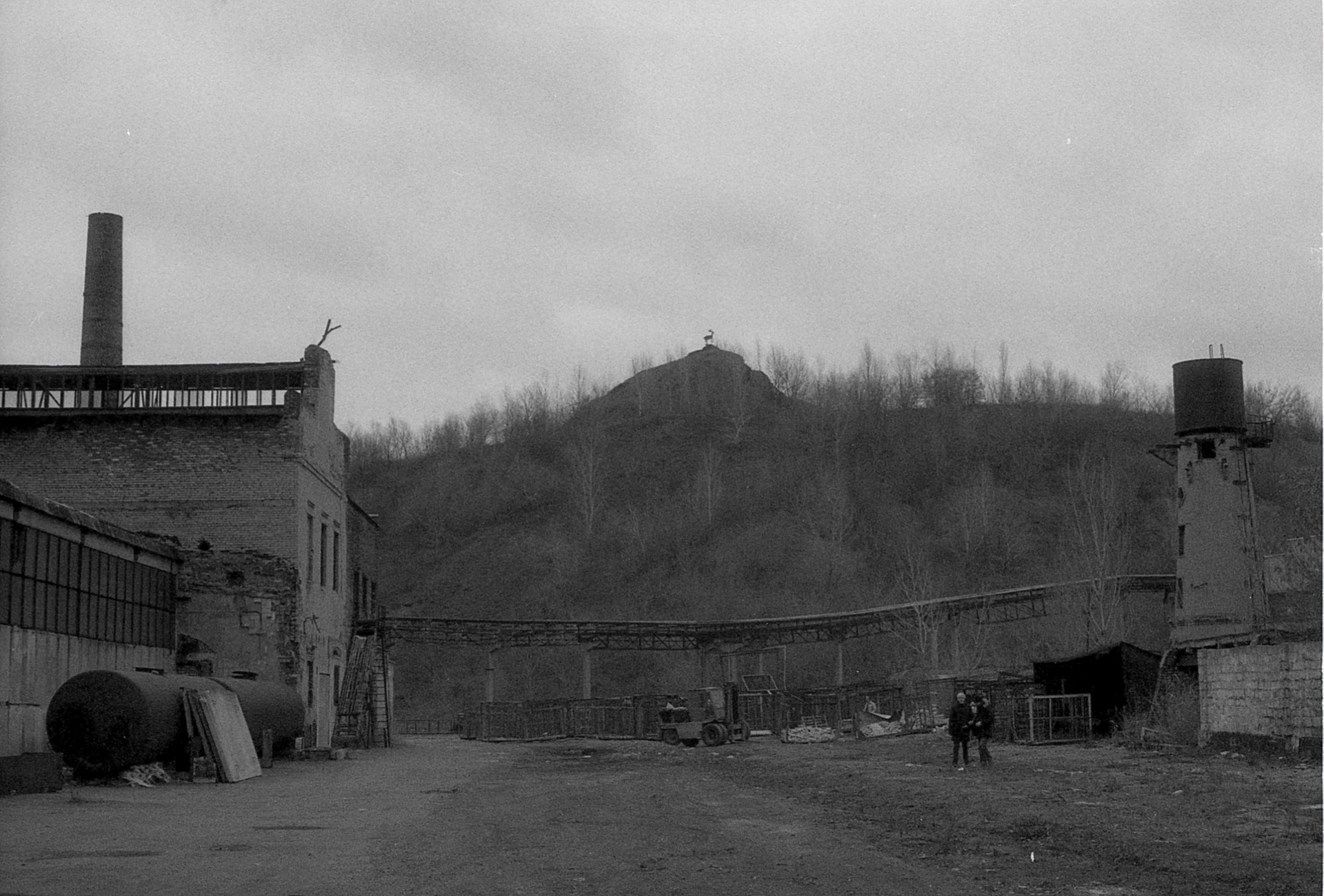 The 49.5m high slagheap on the `Izolyatsia` insulation materials factory.
Slagheap with a deer on top. Source: 2012, Dima Sergeev.

It is an artificial mountain made of discarded material from a mine. The former plant is obligated to Mine No. 12 (‘Yevdokiyivka’). The ‘Izolyatsia’ Foundation slagheap has a special distinguishing feature: a two-metre deer on its apex. Historians date its installation to the 1970s-1990s. The metal construction on a local slagheap became a landmark for the whole region: because of its position it can be seen from any point in Yevdokiyivka, a settlement on the edge of Donetsk. From that same slagheap a panorama of the whole of Donetsk opens up. The ‘Izolyatsia’ Foundation team developed a concept which included the slagheap as an integral part of a future eco creative village on the former plant’s site. In this concept the slagheap was recognised as a unique and characteristic part of the site, and not just a painful reminder of former industrial greatness.

In 2011 the British landscape architect Rick Rowbotham developed a plan for transforming the slagheap into a viewing platform and a source of hot water for heating the Foundation’s premises. Volunteers cleaned up the site around it themselves: these were concerned Donetsk residents who helped the art centre team create a new space for their future. Lectures and discussions were held on the slagheap, in particular the Days of Street Art at IZOLYATSIA events (2011).

In that same year (2011) the art centre team decided that the slagheap should become a large canvas for temporary pop-up exhibitions. Through open competitions the ‘Izolyatsia’ Foundation selected artists from across Ukraine who created new works on the former waste dump. This is how the project Footprints on Snow came into being: under the direction of the Odesa street artist APL315 a huge rainbow appeared on the slope of the slagheap, dotted with footprints. A continuation of this was the competition for artistic ideas Footprints on Snow: Urban Oases: in January 2013 the Foundation team and the artist Kostyantin Martsenkovskyi transformed the snow-covered slagheap into a 15 x 26m colourful carpet. After this the ‘Izolyatsia’ Foundation held the Footprints on Snow winter photography exhibition, the winners of which were chosen on social networking sites by Donetsk residents.

The deer on top of the slagheap became a distinct symbol of the ‘Izolyatsia’ Foundation. Now the city’s residents associated it not with the abandoned plant, but with vibrant art events and new experiences. On June, 9th, 2014, at approximately 09:00 am, the Russia-backed illegal armed formations have entered the ‘Izolyatsia’ Foundation territory. Armed men asked security to not resist. Representative of the Russian occupation administration, Roman Lyagin, have told, that the factory space will be used to store and sort humanitarian aid from Russian Federation, as well as a place for administrative tasks. Also, he expressed interest in the use of a bomb shelter located on the territory of the factory. 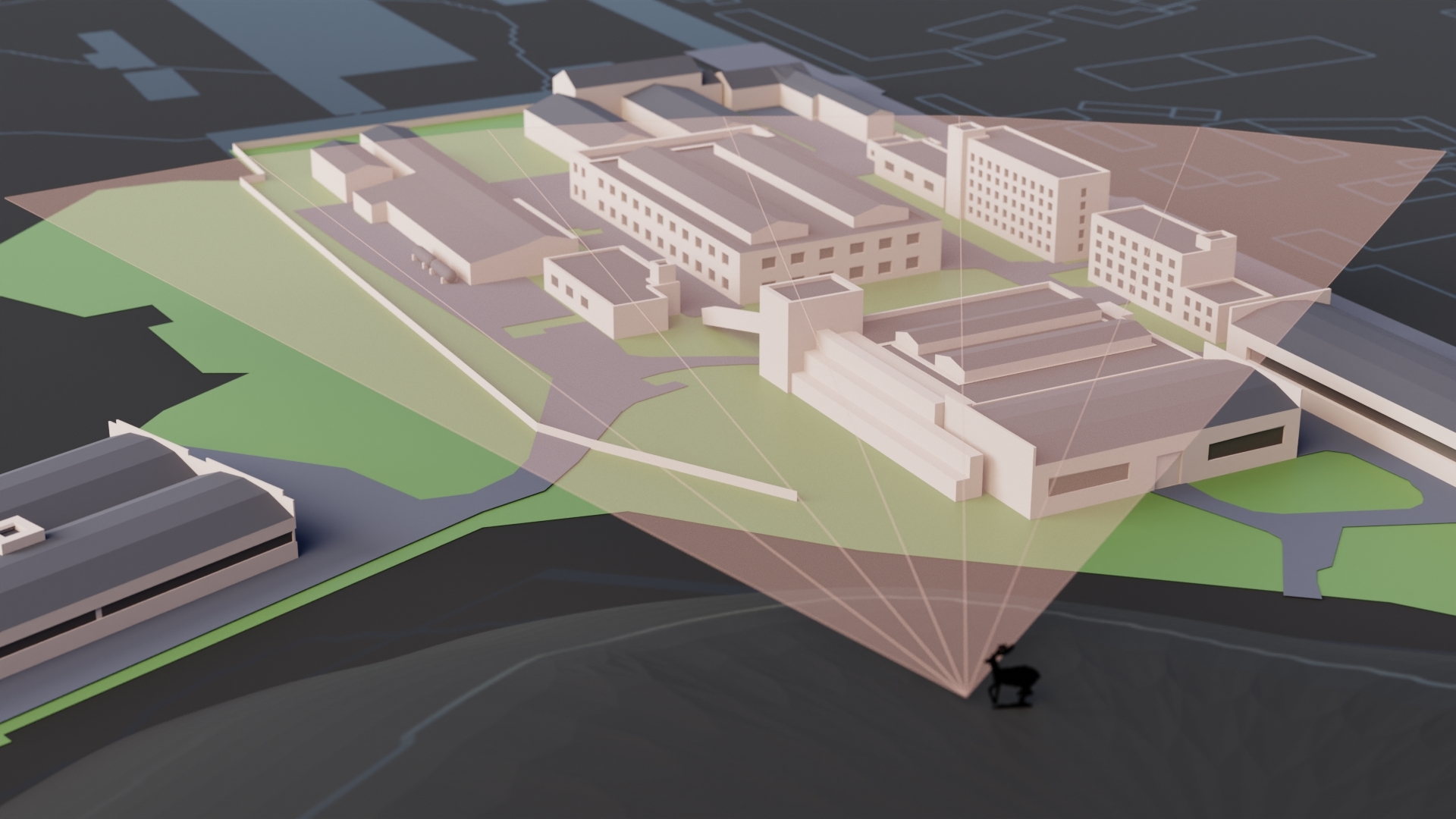 After the ‘Izolyatsia’ Foundation site was seized, armed Russia-backed illegal armed formations placed a gun emplacement with a sniper on the slagheap by the deer. This enabled them to see the entire space around the plant and shoot at anyone who they deemed suspicious. According to eyewitnesses, two snipers are constantly guarding the prison from hidden positions.