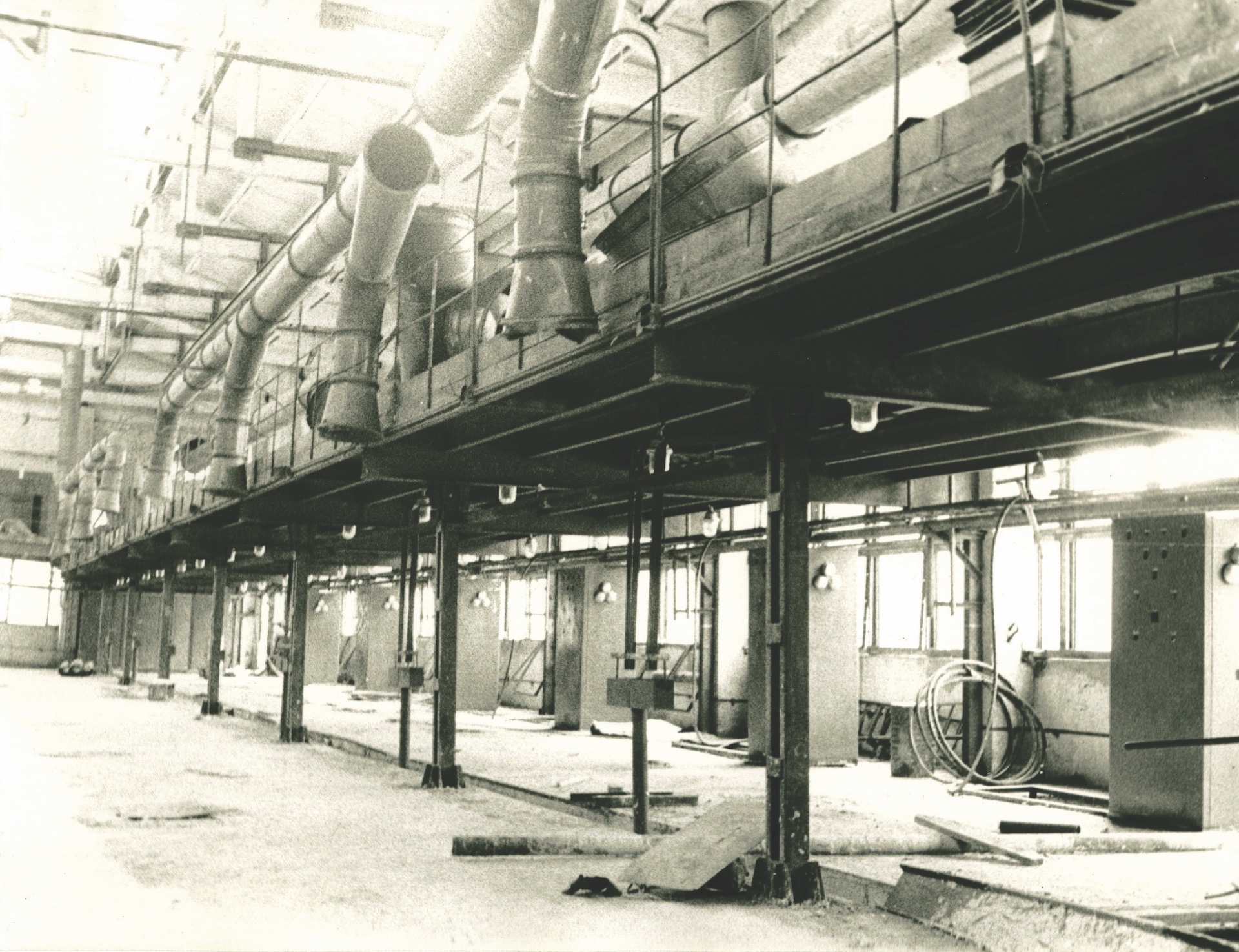 In the early 1990s a new enterprise, ‘Prima’, was built on the ‘Izolyatsia’ Foundation site. Prima worked in the production of foam and other chemical substances.


The company’s activity was first and foremost directed at work with foreign customers. They used a large workshop divided into two parts for their work: a part for production and a large warehouse for the finished product. However, Prima’s activity was discontinued with the decline of the plant. 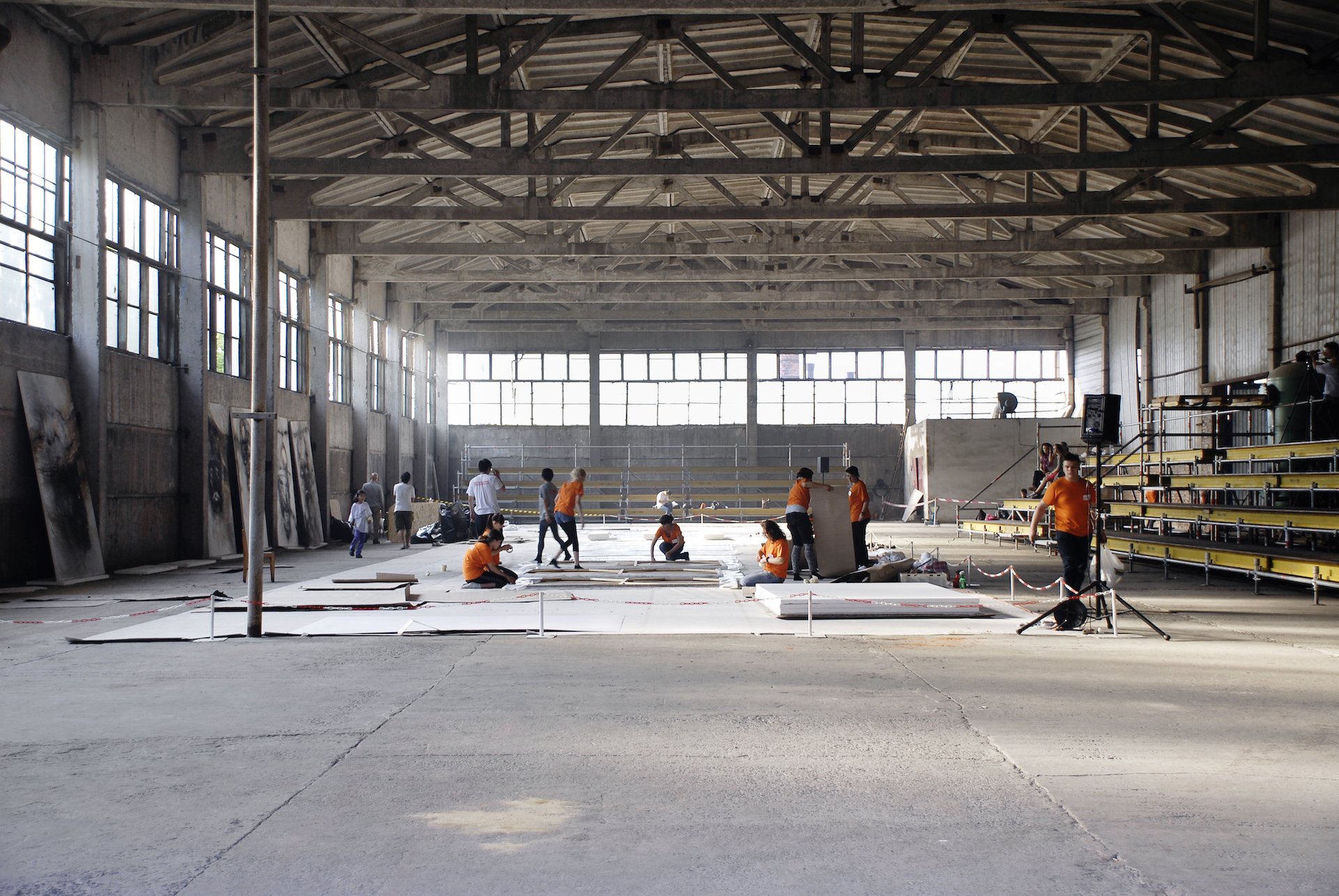 Since 2011, Prima has been used as a gallery and space for public events, concerts, performances, fairs, etc.
Preparation for Cai Guo-Qiang's performance in Prima's building. Source: 2011, Dima Sergeev.

Prima’s large spaces were ideally suited for big events, exhibitions and concerts. The dimensions of the workshop allowed the building of separate exhibition spaces inside it and the staging of theatrical performances, concerts, conferences and fairs.

In 2010 the Chinese artist Cai Guo-Qiang and more than 100 local volunteers created gunpowder drawings in front of viewers’ eyes in the Prima building (1040m Underground). The next year (2011), Prima became an exhibition hall for participants in the Partly Cloudy residency, with famous Ukrainian photographer Borys Mykhailov performing the role of curator.

On the eve of the the Russian-Ukrainian armed conflict in Ukrainian Donbas, in 2013, the American theatre director Virlana Tkacz and the Ukrainian writer Serhiy Zhadan staged the theatre performance Underground Dreams in Prima. For this the art group interviewed local youth about their dreams and relationship with their hometown. The performance posed a question about the true voice of the Donbas: a young voice, born at the same time as independent Ukraine, outside the temporal and mental limits of the Soviet Union. Zhadan and Tkacz used the metaphor of coal, as coal is in essence former trees and roots of everything.

Fragments of American poetry, translated into Ukrainian by director Virlana Tkacz, were used in the production. The monologues were written by Serhiy Zhadan. Local artists and youth took part in the performance. It was one of the most significant events held in Prima.

In 2016 it become known that Prima was being used as warehouse and a forced labour site. The representatives of the Russian occupation administration removed the sandwich panels that divided the hall into two halves, possibly in order to sell them for scrap metal.

According to the testimonies of former prisoners, in Prima the representatives of the Russian occupation administration stored stolen equipment, including new Toyota cars from a car dealership. Captives were brought there for forced labour: repairing equipment, reloading ammunition, moving cargo, cleaning. Moreover, there was no instruction given on safety measures, and they did not give out protective clothing or equipment, even though the prisoners would work with chemical substances amongst other things. The captives were rushed along during their work and beaten with sticks. Work was carried out under the observation of armed guards, who for their own amusement shot at the feet or over the heads of the prisoners.

However, it turned out that creative work was not alien to the representatives of the Russian occupation administration. It was in Prima that they took fake photos and videos in which armed people depicting Islamic fundamentalists with the flags of ISIL and the Ukrainian Azov special unit in the background. In particular, in 2016 Russian media actively spread fakes made on the ‘Izolyatsia’ Foundation site about ISIL terrorists supposedly fighting in voluntary military formations of Ukraine.